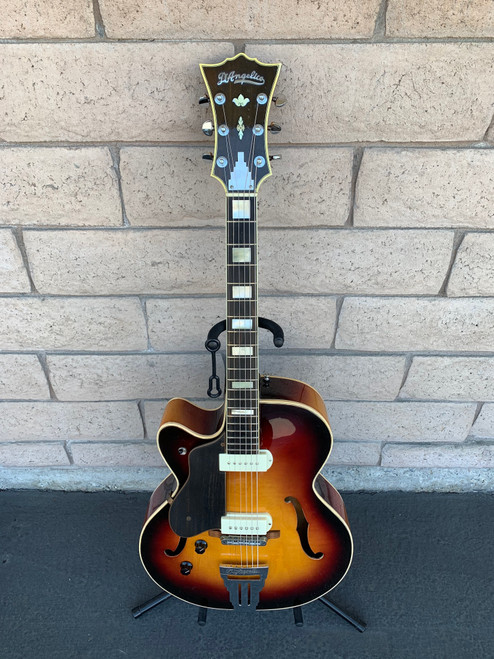 This late 1950's D'Angelico "Double Electric" archtop guitar is built on a body provided by the New Jersey manufacturer United.  In the 1950's, cutaway electric guitars became more and more popular, and John D'Angelico  who was now the recognized master builder of carved archtop guitars,  could not keep up with his orders.  This and his failing health resulted in him making a decision  to offer lower priced archtop  guitars made with laminated maple bodies that he purchased from two New Jersey companies.  United was one of these companies.  It was owned by Frank Forcillo, a former employee of John D'Angelico.  United built many bodies for D'Angelico, and was also able to offer left-handed cutaway bodies.  Gryphon Stringed Instruments in Palo Alto, Ca. offered the only other left handed model that they had heard of a few years ago, until this one came into my possession.  The Gryphon example was the same one pictured on page 59 of the book, "The Chinery Collection, 150 Years of American Guitars."

This guitar with the United body was joined to a neck built in John D'Angelico's New York City shop, and fitted with typical hardware used on his more expensive handmade guitars.   Like most of these guitars from this period, the bodies suffered from "celluloid rot," and we therefore have removed the original binding and replaced it with new binding, restoring the body to its original appearance. The sunburst finish is original, and as this guitar sat unplayed since the mid 1970's, it is in beautiful condition.  There are a few small dings and scratches, and some chipping to the finish above the necks heel cap. There are also some stress cracks around the input jack, but due to the strength of the laminated sides, the area is solid and without issue.  Remarkably, there is no checking to the lacquer finish, indicating that the guitar was probably not used for gigs and transported in and out of a house in cold weather.  After the body was rebound, the entire body was buffed, and the overall appearance of the guitar is pleasing.  The maple neck is straight, the ebony fingerboard and frets shows no wear, and the finish on the back of the neck is smooth to the touch without chips or dings.  All of the block pearl inlays and the headstock inlays are original.  The fingerboard inlays are at positions 1,3,5,7,9,12, and 15.  There are corresponding side dots matching the fingerboard inlay positions.

The tailpiece and truss rod cover and D'Angelico logo at the top of the headstock are all chrome plated and original.  I also believe that the ebony pickguard and its mounting hardware is original, as the same shape pickguard was used on other similar right  handed models.  It is impossible to be certain of this however.  There is evidence of Grover sta-tite tuners being original to this guitar, but it now has chrome Grover Rotomatics installed as did most of the right handed versions of this model.  The strap button screwed into the side near the heel of the neck is not original, but no other holes have been drilled in this guitar for a strap button, so the positioning of this button is most likely original, but probably replaced the eye hook traditionally used by the maker.

Finally, the original Fransch (Franz) single coil pickups have been replaced by new Reproduction Fransch  single coil P-90 style pickups.  All of the electronics have been replaced-new pots, wiring, selector switch-and are problem free.  The replaced  bridge is fabricated from a height adjustable  tun-a-matic top with a rosewood base.  The guitar plays great, sounds great, and looks great.  An older Guild archtop hard shell case is included to protect this beauty

This product hasn't received any reviews yet. Be the first to review this product!