About Us and Our Services

Welcome to Union Grove Music, serving the Santa Cruz area since 1972. We specialize in used and vintage instruments.  offering expert repair and appraisal of stringed instruments as well as instrument sales.

We have closed our downtown Santa Cruz Pacific Ave. store and now have a new location. We are open by appointment only; please call us or use the contact form to make an appointment.

It's very important to periodically update the value of your vintage collectibles. We provide professional, thoroughly researched, written insurance appraisals.  Please Contact Us  with any questions.

Santa Cruz Stories: It’s been a long and wild ride for Richard Gellis and the soon-to-close Union Grove Music 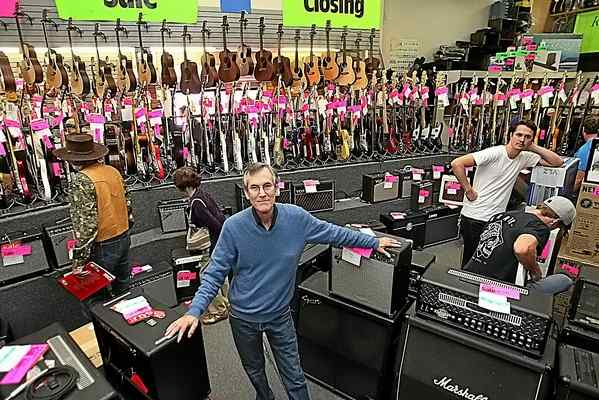 Richard Gellis established Union Grove Music in 1972, and has been its principal owner since 1978. (Dan Coyro -- Santa Cruz Sentinel)

SANTA CRUZ >> Santa Cruz’s Music Row isn’t enormous. It’s bookended by downtown’s signature live music venue The Catalyst on one end and Streetlight Records on the other. But for music fans who want to go beyond listening to recordings or live acts, and actually create their own music, the heart of Music Row has always been right there in the middle: Union Grove.

In a few weeks, Music Row will lose its center when Union Grove, the long-time emporium of guitars, drums, amps and keyboards, closes its doors for good.

Richard Gellis, the store’s co-founder and owner, has been mulling retiring from the daily grind for a few years. When recently faced with the prospect of signing a new 10-year lease, he figured, why not now?

Turning 80 was the last thing on his mind back in 1972 when Union Grove opened. The idea for the store dates back several years before that, when Gellis, a native New Yorker, and his buddy Casey Keller, a Californian, were undergrads at the University of Pennsylvania in Philadelphia. They were a couple of guitar-playing hippie kids who made a pact to one day open a music store together.

Life intervened and the two pursued separate careers on separate coasts. But the idea wouldn’t die. The two began actively considering locations — Richard eyeballed East Coast college towns such as Amherst and Chapel Hill, while Casey kicked the tires on Ojai and Eugene. Finally, Casey found Santa Cruz and considered a perfect landing spot. He invited Richard out to take a look.

“It certainly lived up to his description of it,” Gellis said.

The two long-haired college grads were part of a younger generation just beginning to inherit its rightful place in the culture and the economy. There was already a store in town that sold musical instruments, but, Gellis said, that store wasn’t down with the Age of Aquarius.

“They were very straight,” he said. “They didn’t like people with long hair.”

Union Grove opened in the summer of ’72 as the “alternative music store” on Cathcart Street, near the present-day location of Hula’s restaurant. The store welcomed the hippie generation. In fact, its first two years in business, Union Grove sold exclusively acoustic instruments. Soon enough, Union Grove went electric — almost a decade after Bob Dylan had done so. And by the late ’70s the store was booming. It moved over to a larger space on Pacific Avenue, even opened up a second store in Los Gatos. That was Union Grove’s golden era.

“Back then, there was no internet,” Gellis said. “People shopped locally. We dealt with so many of the local musicians and bands. We went out to visit the clubs to see what was happening.”

Eventually Casey got restless and Richard bought him out. The radical changes in the music industry put a lot of pressure on music stores to keep up. The 1989 earthquake closed the store temporarily, until it was able to emerge in 1990 in its present location, which was once a furniture store.

Recent years have been even tougher. Guitars and amps remain Union Grove’s bread and butter. But the online world has taken its toll. Even if brick-and-mortar stores can

remain competitive in price, state sales taxes drive many to buy online. “Most music stores have just become showrooms for the internet sites.”

Union Grove is now in the midst of a going-out-of-business sale, hoping to have everything sold by Dec. 24.

Santa Cruz story: Came to Santa Cruz in 1972 with then-partner and friend Casey Keller to scout a location for a music store. Union Grove opened originally on Cathcart Street before expanding to a Pacific Avenue address. The store moved to its present location following the 1989 earthquake.

Shake, rattle and roll: One of Union Grove’s most famous community efforts was its 1990 post-earthquake fundraiser for charity, in which the store gathered as many guitarists as possible to play the old Bill Haley song ‘Shake, Rattle and Roll.’ The event was shooting for a Guinness Book of World Record total and it captured the record with 532 guitarists all playing at once, including as ‘Guitar No. 1,’ then mayor Mardi Wormhoudt. The record was soon taken away by a crowd in Ohio. But the event carried for a few years, raising money for music education in local schools.

What now?: Gellis still has a passion for selling guitars but he’s changing his focus. He said that he will soon open a new business that sells only high-end vintage instruments, and that the store will be open by appointment only. He said that his new venture will steer back to his roots in music. ‘I really liked doing research and restoration work.’